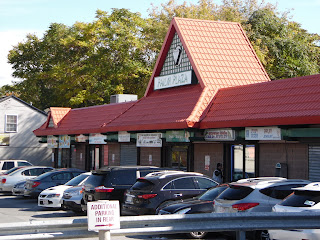 After seeing post after post on Facebook friend of Food from Cambodian restaurants in Lowell, the Red Rose among them, Grace couldn't take it any more and we took a family trip to try it ourselves. 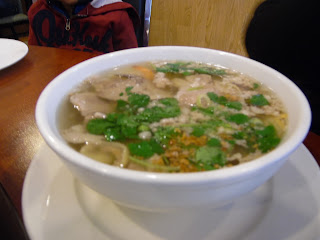 The signs say that they serve Cambodian, Chinese, Vietnamese and Thai food. With so many options I actually didn't know what to order or what I wanted. Grace got the Red Rose Noodle soup for herself, 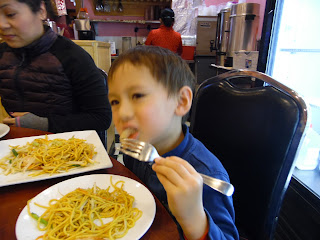 and Lo Mein for the kids. 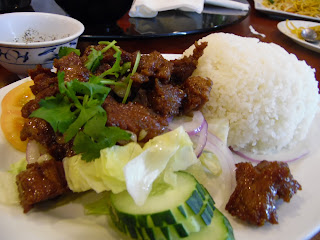 I got the beef lok lak. I picked it mainly because I didn't know what lok lak meant and I think I could smell beef and I saw other people eating something similar. In the end I am glad that's what I got. I only wish that we had gotten this dish fro the kids as well instead of the trying the "safe" lo mein because Dai Dai ended up grabbing things off of my plate anyway. Grace thought she would like to try some of my dish but after looking up from her noodles, the dish was gone. Grace said that she think the "lok lak" means twice cooked and that basically the beef if deep fried and then stir fried again. She had had this dish at Vietnamese restaurants in Chinatown and usually the beef is quite hard. The beef at Red Rose however was very soft. 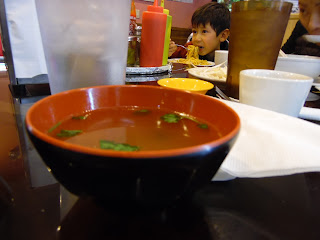 This dish also came with a soup. The broth was fresh. There was that home cooked feel to everything in Lowell, from the bakeries and deserts to the restaurants.

I am again, noticing a rule. Lower rent usually equals higher quality ingredients. But the fact that Lowell is close to the farms might have something to do with it too. 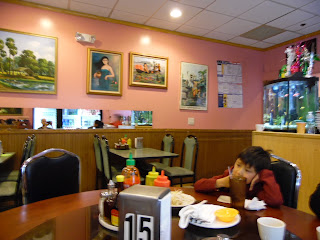 I liked the art work hanging up in here too. Paintings, and a photograph of people in costume performing a scene from the Ramayan. I recognized Hanuman... but I sort of realized how ignorant I am about Cambodian culture in general. There were also a lot of Chinese decorations as well, and like I said, Chinese food is also served as well as Vietnamese and Thai food. 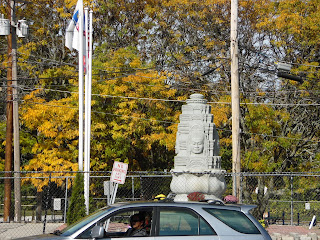 This area is known as Little Cambodia officially. I was going to call it that in the title of this post anyway, but talking to a friend I found out that this was a very big deal for the community. Politicians and ribbon cutting that sort of thing. And that it might even be the first Little Cambodia in the United States. I was told to fact check that though. 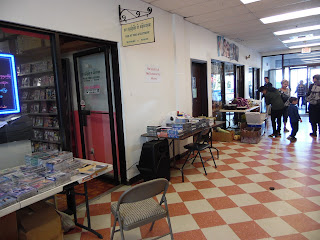 I didn't find anything that said it was the first. It seems like there was something in Long Beach California since 1959 but friends that have been there say there seems to be a community but not a town per se.  This Little Cambodia had that feeling of having strength of numbers and will power. With shops that were selling fresh produce, crabs in plastic containers, and VCDs. It really did make you think of what Chinatown used to be.

Later we went over to University Ave to get Bubble Tea at Eggroll Cafe, where you can also get Bento boxes, egg rolls and rice plates. A hip Fusion  place. 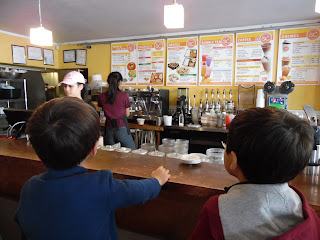 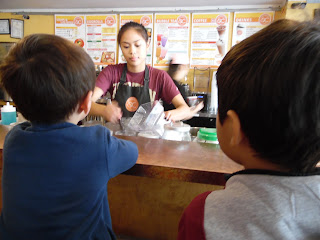 And watched as the Boba was poured into the strawberry shake eagerly awaiting the sugary drink they would share. There were also striking photograph's of Iran hung around the Cafe gallery style. I didn't think to take pictures but you should definitely check it out. 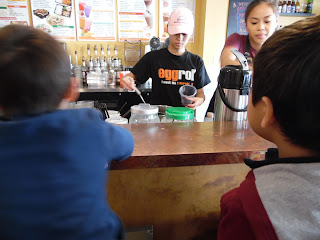 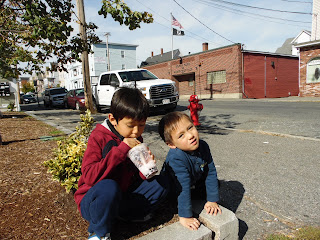 A word of advice? Always get a Boba tea per kid. You think they can't finish one by themselves. But they can and they'll fight over it too.

Well that was our little weekend adventure trip to Lowell. We tried to go apple picking as well, but all the apples were picked. We'll be back for more Cambodian food and Boba for sure though.

Unknown said…
This is awesome!