Posted by Kung Fu Dad on October 01, 2016
I had gotten word that Hei La Moon had a banquet to celebrate October 1st.. but my intel could have been wrong. In any case I was down there and took some pics 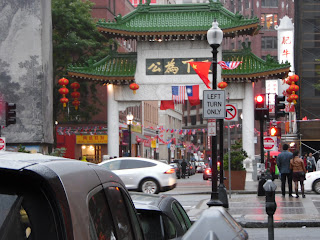 You can't really see this but the five star flag is on the pole there and right behind it is the Republic of China flag. Based on some comments, I think people assume again that Chinatown supports the Republic of China because of Taiwan. While there are a lot of Taiwanese in the Boston area... do you really think that Taishanese people who have been here for decades are celebrating the island itself? Or might it be the belief in the Republic of China as an idea. As a hope that one day China itself will be democratic, the same dream that Sun Yat-Sen had?

(BTW the gate, the words written on it? That's Sun Yat-Sen's slogan. The gate basically says, when you pass through here, you are in KMT territory and actually, even though the five star flags are hung up you will notice they are on a big building outside the gate, but inside the gate? All ROC flags. You can call it the Taiwanese Flag. Because that's what it is now. But that is certainly not why Taishanese and Cantonese speaking descendants of pre-Communist mainland immigrants have hung it up all around Chinatown.) 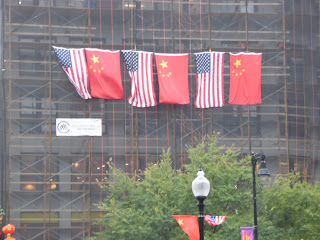 But anyway there are a lot of newcomers, again who want to celebrate the peaceful relations and partnership between the United States and the People's Republic of China (not to be confused with the Republic of China.) 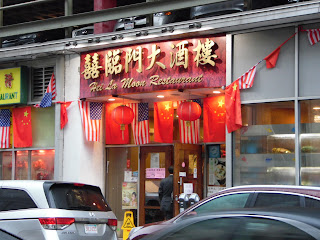 I swear I thought Hei La Moon had a banquet tonight but I could have been wrong. But it's the only restaurant I saw with the five star flag.

What I want to point out is that you NEVER saw this flag in Boston's Chinatown until about ten years ago. Actually even then you didn't see the flag but there was sponsorship and support from the mainland noticeably going into the Chinatown community at different festivals etc. But to see the flag displayed so prominently is actually a shocker to a lot of people. It's new. It's different. And of course what is most important, it is accepted by the United States government, because that's where we are, America.

In New York there are some family and community associations that have already switched over to the five star flag. The Fujianese Association for instance (though maybe that's wrong too. After all I thought there was a banquet tonight at Hei La Moon. Though it is possible it just happened later.) And that makes perfect sense, because if you immigrated here in the 90's straight from China, that's you flag.

Most of the family Associations in Boston firmly keep the Republic of China flag and in fact strongly support the KMT and will celebrate double ten remembering Chinatown's role... Boston Chinatown's role, in the 1911 revolution to overthrow the Qing dynasty. In fact as I mention before on the blog. Sun Yat-Sen visited Boston to raise money for  said revolution.

I think to explain the flags easiest I will have to explain my Kwong Kow Chinese School memories, because that's really where I learned this stuff, or what introduced me to it anyway. Because to an American, the flags just all look like pretty decorations and they might not even see that certain areas have the one and certain areas the other. They might even think that we are all celebrating together and not even notice the tension.

In any case, times are changing and (again rumor) I have heard that the Wong's Association has tried to accommodate both celebrations, putting up the Five Star Flag fro October 1st, the celebration of the Communist Revolution in China, and then putting up the Republic of China flag to celebrate the anniversary of the 1911 revolution. After all they have members who are Lo wah kew those that have been here for decades and may have strong loyalties to the old flag, as well as newer immigrants who either don't know or care about the old flag, or want to celebrate the relationship between the China they grew up in, which is run by the Communist Party has more economic freedoms, and the Untied States.

I mean very it is a minority of people I have talked to in this country who are like, up with the PLA and Mao was awesome, and the Cultural revolution was great. But yeah I have met some. Oddly a few from Hong Kong. And of course Taiwanese love there country. And now there are even Taiwanese restaurants in Chinatown. And for me, our family is even half Taiwanese. But I think it's pretty important to explain that those flags are not in Chinatown ONLY for Taiwanese. They are there for Chinese Americans too, who don't speak a lick of Mandarin. As Chinatown is gentrifying and a good deal of people walking around are of Taiwanese decent, or are straight from China and have money, the whole reason why the old flags are put up are totally lost on the tourist or even someone who works and maybe even lives in Chinatown.

In the future maybe both of these holidays, October 1st and Double Ten, will be a week that is an excuse to get drunk and party and share cultural ties. That's what a tourist might even mistake this for now. But we ain't there yet, trust me.

(there was a past year where I attended the flag raising ceremony for October 1st. It was a bizarre cultural experience for me and I blogged about it on Kung Fu Dad. Take a look here.