Sex drugs and Chinatown: From Scollay Square to the Combat Zone, to 2016 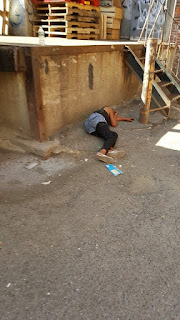 Many people equate the word Chinatown with sex, whores, drugs, druggies, seedy establishments... you get the idea.

And a lot of people equate gentrification with an end to these things. I would first like to point out that the above picture was taken weeks ago.

And also, the combat zone is not something that always existed. In fact it was born in the late 60's to early 70's. The old combat zone was Scollay Square, which the city got rid off by razing it and then building City Hall, one of the ugliest pieces of architecture designed by I.M. PEI, a Chinese American architect who also designed John Hancock, which is one of the pride's of the city. City Hall has a lot f brick and actually, that may not have been how it was conceived by the architect. It might even be a bone thrown to the Unions. All I am saying is as ugly as City Hall looks... maybe it had potential when first conceived. The point of putting City Hall there though was definitely to get rid of Scollay Square.

So all those businesses of porn shops and strip joints pushed out into the City. Chinatown was a neighborhood that did not have much a voice at that time, and so that is where they went. And that was the birth of the Combat zone. The community tried to stop it, but the 1st Amendment prevented that, and it has taken until now for the Combat zone to shrink to two strip joints which require a dress code. In fact I just gt asked directions by a young group of Irish guys who seemed to be looking for a Chinatown that their fathers used to frequent and tell them about. We told them where Centerfolds was.

"Ummm I don't think you can get in. They used to have a dress code... coat and dress pants... but you can try, it's right there." said my friend.

The Combat Zone is gone, the famous Naked Eye sign (whose telephone number was two digits reversed from my home telephone number as a child, which meant I had a lot of interesting phone calls growing up.  In fact, if you ever called what you thought was the naked eye and had a young boy answer the phone... that was probably me you spoke to.

So people like to talk about the sex and the drugs as A) something from the past in Chinatown and B) something that gentrification fixed... And there is something to be said for that thinking. Like yuppies (I say that instead of white people because there are whites who have lived in Chinatown or had ties to it going back decades and yuppies of Asian decent who have just moved in)  have saved the Chinatown Community from themselves.

But it is important to note that there in the early 60's and definitely the 50's Chinatown was just Chinatown. A Chinese community with no ties to the Combat Zone, because that was in Scollay Square. The Combat zone is such a big part of what Chinatown was that it's kind of hard to divide the two.

In fact walking by where it used to be, they have reinvented what it was referencing song and dance shows from what seem to be the 20's and 30's. I have to look into that more, but I think it is important to reiterate that the combat zone did not always exist the way it did in the seedy nasty way of the 70's and 80's.

And to say that the aspect of Chinatown that involves sex in back alleys and overdoses is gone is fiction. Many business owners still see this every day. People of Chinatown, residents, business owners, people who work there, people bringing their kids to Chinese school, see this and it pisses them off to no end to see that type of thing in THEIR community. And we aren't talking about 2am. We are talking broad daylight. Why? I guess there are many factors. I do think that Chinatown is still that old meeting place in peoples minds. Like the young Irish men coming in from the suburbs looking for adventure in the Combat zone. When people were searching for Scollay square and saw City Hall, the change was obvious enough. But when you see the lights and signs of Chinatown you still may think that world your Father's and Uncle's told you about is right around the corner.