Posted by Kung Fu Dad on January 10, 2017
I have said in the past that Chinatown is like a 100 different communities right on top of each other that don't necessarily always intersect. However whether you are a "lo wah kiew" or a new comer from China or even from the suburbs, there are those in Chinatown that are so influential that even if you don't know them, you know of them.

Uncle Paul is one of those people.

I grew up in his neighborhood without knowing it though. I didn't really meet him until I was in my 20's and doing crime watch. It is possible that perhaps I had seen him speak at a Kwong Kow Chinese School Graduation. But at the time I was probably desperately pretending to understand what was being said. (Chinese School wasn't fun for me.But it was memorable)

I had heard of Uncle Paul before I even met him. He had a reputation for being smart. And on crime watch, as people talked it came out that not only was he into martial arts, but that he had somewhat of a reputation for being a badass. When you met him, he actually looked a lot like Hollywood actor, Victor Wong.

His English is also extremely good. Now I just read an Asian Facebook friend's post complaining about people commenting that his English is good, because it implies that they are somehow not from here. Let me put it this way, Uncle Paul speaks English like a jook sing, an ABC, like someone who was born here, if not better. After all I know Jook Sings who didn't actually learn English until they started school.

So I was surprised to find out that he wasn't born here.

And he was very approachable.

As more and more stories came out about how he had military training I envisioned this imaginative narrative of how all these stories came to be. The truth was a lot more boring than the story in my head but it's still cool.


Uncle Paul:
"I was born in Guangzhou and brought up in Hong Kong. Went to Taiwan for college, completed my ROTC training like every other college student and earned my LLB degree.  I had my master's from Boston University. I was trained as a real estate appraiser and had the Certified Property Manager designation from the American Institute of Real Estate Management. In the late eighties, I was an instructor in MIT's Minority Real Estate Developers Training Program. I have participated as panelist in various national real estate conferences."

I knew that Uncle Paul had been in real estate but I didn't understand these details. Actually maybe I still don't.

Uncle Paul was also always interested in the fact that I did martial arts and would ask if our school practivced push hands at all. One time, after some meeting he came by the school and got in a low horse stance and started doing these moves. I was shocked.

The truth is a lot of people in the U.S. do Kung Fu. A lot of people can get into a low horse stance. But horse stance is not just about low. That grip of a still, stable Hung Gar stance is very difficult to obtain, and not only that, it's not really something that you can show off. It's not a back flip. It's also not something even the greatest fighters in the ring and the Octagon necessarily have. But it takes a lot of practice to get.

Now there are all sorts of arguments between what is a "better" stance from Northern to Southern styles.... but of the "ding gung lik" type of horse stance from a Hung Gar tradition..... Uncle Paul had, at that moment, one of the best horse stances I have seen in the United States.  The thing is, I hadn't really known he had actually trained in Kung Fu that seriously.

I asked him to clarify where he learned in the interview.

"I was a member of the judo club in Ying Wah College in Hong Kong. Continued to train in Judo in college. Joined Master Chu's Tai Chi class as a student for a couple of years in the early seventies. Trained with Wah Lum along with my children and nephews and nieces in the early nineties. In order to force myself to continue to exercise, I taught Tai Chi at Gee How Oak Tin in recent year. I can barely walk nowadays, goodbye martial art."


It's obvious that Uncle Paul is a leader in the Chinatown community. But why? I mean the details. Here they are.
"I have been involved in various aspects of real estate for 44 years, from property management to small and large scale development and now in financing investments. I have been with Mass Housing Investment Corporation since 1995. I was the Director of Development for 11 years and now transitioning to the position of chief credit officer. MHIC is a 501(c)(3) public charity having a mission to assist urban and minority communities in financing affordable housing and community developments. As related to Boston's Chinese community, It has financed Waterford Place, Oak Terrace, Tremont Village, AACA/KKCS Education Center, Fortes Street and South Cove Nursing Home in Quincy.
As to involvement with the City of Boston, I was a member of the Fair Housing Committee in Kevin White's administration, a member of the Boston Employment Commission and the chair of Boston's Living Wage Advisory Commission. I was also a member of the Asian American Commission under Governor Bill Weld. I am a graduate of the Boston FBI Citizens Academy and a member of its Cultural Advisory Committee."

Well it wasn't as interesting as my romantic notion of going to Taiwan to join the military for ideological reasons and becoming some sort of Sherlock Holmes type consultant or James Bond style agent. But okay still cool. 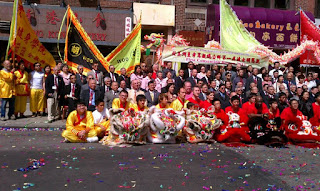 (from a North American Oak Tim Association anniversary celebration in Chinatown. The street was blocked and several teams performed. Members of the organization from all of the country and even Canada came to Boston that day.)

Uncle Paul is also very active in the Oak Tin Association, which is a family organization (think broad and super extended)  which has the Chan's Wu's and Yuen's (and all the variations like Chin, Chen, Woo, Hu,  Yoon, etc.) lumped into one because somehow all of those last names actually have a common ancestor or something like that. Come to think of it, I should do a post about each Association.