(Boston) - Tufts Medical Center has announced seven Boston programs will share more than $300,000 in grants to educate the city’s Asian community about a deadly drug - tobacco.

“Nationwide, we are starting to see a decline in cigarette smoking in many ethnic groups, which is the result of decades of prevention messaging,” said Deeb Salem, MD, Physician-in-Chief at Tufts Medical Center. “But Boston’s Asian residents are largely immigrants from countries where smoking is commonplace. Many don’t speak English and have never seen or read any messaging that suggests smoking causes cancer.”

Nationally, the Asian population is among the lowest when it comes to smoking – 7 percent of Asian adults in the United States smoked cigarettes in 2015 compared to 15.1 percent of U.S. adults overall. But according to the Boston Public Health Commission’s Health of Boston report, the rate of smoking in Boston among Asians tallied 14.7 percent in 2013, the latest data available. The higher rate is in part due to the larger number of Vietnamese adults living here, one of the subgroups with a particularly high incidence of tobacco smoking.

“We’re pretty convinced the incidence is higher in the Asian community than the general population in this area. You can see it when you walk around Chinatown,” said Sherry Dong, Director of Community Health Improvement Programs at Tufts Medical Center. “Part of our mission at Tufts Medical Center is to help the community be healthier. We need to do what we can to provide education about the dangers of smoking in our Asian neighborhoods, and this year’s awardees are going to help us do that.”

Tufts Medical Center established the Asian Health Initiative (AHI) in 1994 to focus on health issues impacting the local Asian community. The recipients of the 2017-2019 grants will put into place a variety of programs and outreach including anti-smoking education for Asian youth – by youth, workshops for adults, and phone counseling to help smokers quit. They will also publish a new bi-lingual quit smoking directory.
Richard Chin was first introduced to smoking when he worked in a Chinese restaurant as a child. Now, as Director of Community Development at the Wang YMCA in Chinatown, he will use his grant to educate restaurant workers about the dangers of tobacco.

“Asian restaurant workers are heavy, heavy smokers. It’s a way of taking a break from the stress and to share a social moment with your colleagues,” said Chin. “But they don’t know much about the impact of smoking or even second hand smoke. We’re going to go into restaurants with informational brochures and recommend workshops where they can learn more.” 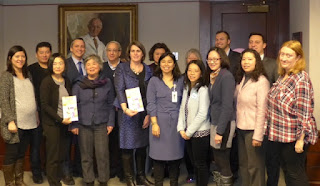