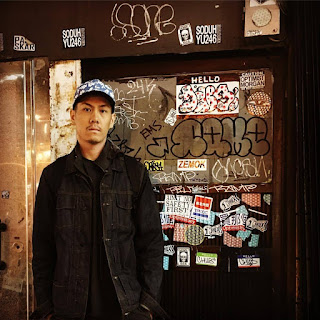 I had the opportunity to interview Hip Hop Artist LuDow.  The video takes place in Boston's Chinatown. The music is hot and the topic is even hotter in this political environment.

How did you get into Hip Hop?

I think I was in 4th or 5th grade when my friends introduced me to the music. I remember the first song I heard was "Ready or Not" by the Fugees. I remember us trying to break dance. Actually one of my first introductions to Hip-Hop culture wasn't through music but graffiti. I remember my friend was really into it and one day we were chilling he made me keep watch as he spray painted the back of this school haha. In high school, Hip-Hop was everywhere; I listened to a lot of rap and when I was 17, me and my friends started rapping. We would get high and drunk and start freestyle cyphers, rapping "off the top", improvised, nothing pre-planned or written. Back then a lot of people would freestyle at parties; it was fun and allowed us to creatively express ourselves in a competitive environment. Some people don't like the competitive and aggressive nature of rap cyphers but honestly that was a huge part of what pushed our skills forward. I started writing raps in college trying to put more meaning and intention into the music.

What did you parents think about that?

Hip-hop was our youth-culture growing up in the city. My family always knew I liked rap music. They were cool with it. It's not like they told me to stop or anything but I think for a long time they didn't know I also liked to rap. For a while they would say I was a spoken word artist, which I think it seemed more acceptable than being a rapper.

Where is your herng ha and ho did your parents get to the United States?

Funny you assume my parents are immigrants. My family has actually been in the states for generations. Both my grandfathers were born in the US and now pretty much everyone is in the U.S., although a lot of my mom's extended family are immigrants. I have roots in Guangdong (Hoiping, Sunwoi, Toisan) and my dad was born in Seoul. His dad was serving in the U.S. military intelligence when he met my grandmother during the Korean War; they moved to the U.S. soon after my father was born. My family history is pretty complex, maybe we should have another interview about that haha.

What are your thoughts on Trumps Immigration Ban?

Probably what most sane people are thinking. It's bad. Very bad. Racist, xenophobic, Islamophobic, fear mongering. I'm glad that it has been shut down; it's clearly illegal. It's based on the same crazy white supremacist mentalities that gave us the Chinese Exclusion Act and Japanese internment. The current political climate is really focused on white nationalism and a fear of non-whites. It's a totally unfounded logic that immigrants are dangerous and need to be monitored. Trump's rhetoric has led to a lot more anti-Asian hate too.

What do you think the purpose of Hip Hop is in terms of politics and community organization?

Hip-Hop is rooted in being a form of expression for oppressed peoples. So much of it's history is connected to political situations and current events. It can be used to educate, to politicize, to build community. Hip-Hop has the potential to be a very powerful form of communication, especially now that it's so global and part of the mainstream. Rap is a way for us to express their voices, opinions, thoughts, and experiences and that allows us to connect with each other in different ways.

What is the Chinatown Community to you? Were you ever part of the organizations or sports teams? Do you come to Chinatown often? Why did you choose it as the location for the music video?

Chinatown is a place where I felt proud to be Asian American. My parents, family, and their friends have been involved in the Chinatown and Boston-area Asian American activist community for a long time and so the Chinatown community was a big part of my childhood. I remember going to protests, community events, meetings, etc. In high school I got involved with several youth groups including Chinese Youth Initiative at the Chinese Progressive Association and was a founding member of the Chinatown Walking Tour Collective (now AVOYCE) at the Asian Community Development Corporation. As an adult, I've also worked as an educator with youth at the Boston Chinatown Neighborhood Center.

We chose Chinatown as a location for the Go Back music video because of the message of the song: feeling unwelcome in America and being told to "go back where you came from". Given the perpetual foreigner stereotype, this is something that Asian Americans can relate to and Chinatown is such a central hub of the local Asian community.

What do you notice about the changes in Chinatown and what do you see for the future? How would you like to be involved in that through your music?

Everyone knows that Chinatown has been struggling through the effects of gentrification and a lot of new luxury developments. Over the years I've noticed more non-Asians around the area as well as more young Chinese nationals, mostly international students. I also have noticed that there are more groups of young people in general, less families.

I especially want youth in Chinatown to hear my music and feel connected to the messages. When I was growing up, there weren't many Asian American role models or people who I could look up to and I know how important it is to see people who look like you in the media and entertainment industry. I want these kids to know that they could be a musician, a rapper, an artist too.