Posted by Kung Fu Dad on February 13, 2017
This year, while joining Woo Ching White Crane for the Chinese New Year parade in Chinatown, I met up  the President of the Boston University's power lifting club, Brand Ong. (Brandon also happens to be an old student of mine.) Power Lifting has become somewhat of a craze among Asian Americans especially on the West Coast, and it is starting to catch on here in Boston as well especially in the Universities. 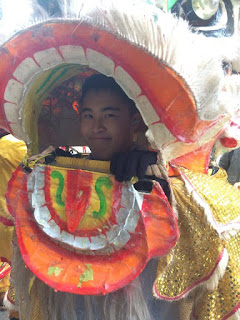 Brandon was killing it under the head and to be honest, what with recovering from a cold and videotaping and carrying my son around... this year was not one of my best. Maybe I should start doing something to give me a jacked stance and energetic lion head shakes like Brandon's

After he learned Kung Fu, he went on to do Tennis and Lacrosse and be quite the athlete. I saw on social media as white girls composed songs for him like the heroes of old.

"I have to thank you for teaching me Kung Fu when I was younger. I thought about how if I hadn't learned those skills when I was that young that I would have been more at a disadvantage when I went onto other sports."

This did boost my ego as a teacher. At first I said that he must have been a natural athlete anyway... which actually is still true. Mostly I say this because I was not that great at sports.

However, although I started Kung Fu at a young age, I didn't have the body mechanics and fighting stuff explained to me that young, because I started with Wushu.

So basically, my hardcore training started at 14 and I did the whole sports in high school thing while my Kung Fu was still developing. In other words had I started on the real training at a younger age as Brandon did and then moved onto sports instead of having them compete both culturally and time wise... things may have been different.

Mostly Brandon's pep talk gave me encouragement to continue teaching my own son... and maybe demand a little more out of him too.

And shoot maybe it's time for the student to become the teacher and I can start doing some power lifting. (Can you do light weight power lifting? Is that a thing? Don't want to hurt myself. lol)