Posted by Kung Fu Dad on February 02, 2017
I have been going around and asking the same questions to many different people. My hope is that by sharing many views we will get a balanced view. 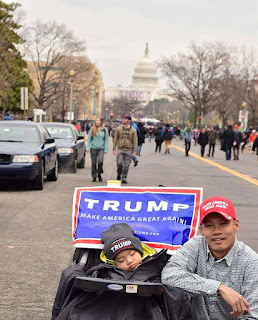 BCB) How did you first find out about Trumps Executive Orders? (the one on immigration) I mean what was your reaction? And do you have a personal tie to refugees? Or are you yourself a refugee?  I hope you don't mind if I ask.

Tony: I first learned about the order from Social media... and like always, it was presented in an anti-Trump style from the opposition party. My reaction can be described as routine by now... observe the opposition whine, then research the facts, then sit back and laugh hysterically at their silly justification to oppose anything.

I was not surprised at such action. I believe that Trump is a man of his words. This falls right in line with what he promised during his campaign. I underestimated the amount of work that would be done within a week in office. Nevertheless, I hope he continues.

As for myself I am an immigrant from Vietnam. I was part of the massive movement of boat people following the Vietnam War.


BCB: Okay.. so like... you're  a political leader in the Dorchester Community. How was your reaction the same or different from those around you?

Tony: Correction: I don't view myself as a political leader or leader of any type in Dorchester. I view myself as an activist. I believe there are many people who agree with my view... contrary to what is publicized in the media and on social media. I believe many people who share my views are reluctant to speak out for fear of retaliation and attacks on their characters, reputation, businesses, family friends, etc.

BCB: What do you think about the order itself?

I was an immigrant once and I stayed almost a year in a HELL HOLE on an island with no running water! Rats ate my feet when I slept! 20 people lived in one little wooden hut!

I never cried about it because America was not my country! I had to wait for my turn and if they didn't let me in! I will stay there until whatever country will accept me! Thank you America and thank you God for picking me:)

The time I spent waiting was absolutely horrible! I went to the woods to get sticks to make fire to cook food, my hut was next to the public restroom without running water! I had two tiny meals a day! Rats ate most of my food:) but you know what? I knew I had to wait to be legalized! I'm no one's responsibility! I left home at my own will!

The world is tough! Now I think about it, if I have to wait at a fancy like heaven American airport for a while, I am so ok with that! So don't tell me how hard it is to wait! I know people from Viêtnam got raped at sea, died at refugee camps waiting, got so sick, waited for years and years and they never open their mouths to complain once! Oh, why don't Americans try to get their own people who are trapped in North Korea jail out first before they worry a lot about a few being held at the airport?

I'm all about immigration because I was a freaking immigrant but it takes time! Calm the hell down! Oh Hollywood! Why don't you ask to see if you can use your money and sponsor these refugees and pay for all their expenses? Let them live in your 15,000 sq ft homes! When I got to America, I made about $4.50 an hour but I sent hundreds of dollars to my friends and family who were still at the refugee camps to help them because I made it out alive:)

Tony: What is said is exactly how I feel. I too was a refugee held at a refugee camp patiently waiting my turn.

BCB:  What do you think about the Media's Coverage about the order?

Tony: I believe the media continues to influence the political arena and it is hurting America. They are big money  businesses. Money will always be their primary goal. I believe there should be more regulations on the intent and effects of media.

BCB: So who did you vote for?

Tony: I was a registered Democrat who switched parties and voted for Donald J. Trump. I made financial contributions to Bernie Sanders but voted Trump after it was discovered the Democrats cheated him.

BCB: But what do you say to the argument that you see on the news and which many of my friends make that the situation of the refugees coming in now is similar to their situation or that of their ancestors? That basically, under Trumps orders, they would not have been allowed in and therefore thecountry would have missed out on all the contributions they offered....

Tony: These people are misinformed or do not have the understanding of American immigration laws. They are easily persuaded and the opposition party elites know this and are taking full advantage of them.

I think I should put this at the

You know.. (this is me now) on a side note, I would be curious as to what my Uncle Francis would have to  say about all this. Basically when I talked to him, he was way more conservative than me, and having fought in the Vietnam war, he ended up viscerally hating his enemy (but only the men) even though he knew it was irrational. However he KNEW it was irrational and that he just had to get away from Vietnamese men and also knew that those particular Vietnamese men in the states are probably great people.

I told him that probably a lot of the people that were shooting at him were Chinese. I shouldn't have said that. But the conversation moved on after several drinks which I don't remember the name of.

My Uncle also had something to say about a black teen shot dead because of the "Stand Your Ground law" And this was a decade ago and there was not a nationwide uproar about it. He had said that "I did a lot worse then that when I was a kid..... imagine if I got shot."

A lot of conservatives are being pin holed and pushed away from the left and the middle in the eyes of the media and many individuals because they say one thing and automatically they must be this or that.

The right is guilty of this as well. We are being divided and allowing a media circus to control our thoughts. I even fell for it the other day, honestly, before I read the ENTIRE article. You just read the title and you get one thing and then when you look for details supporting this, they aren't quite there. At least I don't see them easily. Which is why I have started to collect stories from people I know.

Again, the next article I am going to write on the subject is actually for the Cabo Verde Network and is about another Dorchester activist: Abdul Adil. I will share that on the Chinatown blog though as well, even though it doesn't exactly deal with things Asian.

You know what? Although it is a different perspective... it is not necessarily an opposing one. In fact there are many things Abdul Adil brought up that...well you will see when I share the CV network article.