Posted by Kung Fu Dad on March 31, 2017
Condescending | The arrogance of this White man who gave an unwanted eulogy at a Chinese family's passing of their mother because he thought he had some superior right to lecture grieving Chinese relatives. Before he begins to lecture the unfounded connection between incense and lung cancer in the Asian culture, he should realize that American tobacco companies targeted Asian countries mercilessly and how the coal industry plagued black lungs among American workers. This is a White Savior moment gone horribly wrong. I implore you, if you are ever in a situation like this where some White man begins to lecture you because he feels he's superior than you thus giving him a self-imposed right, shut him down! 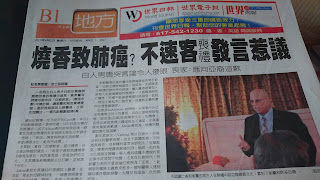 (This was originally posted to Facebook. Vincent Yee is the author of The Purple Heart)