Posted by Kung Fu Dad on March 31, 2017
When my family moved to Boston, we stayed with relatives until we rented a place on Oxford Street in Chinatown. It has six floors, with a laundromat on the bottom floor, and two elevators. We were on the fifth floor, then the second. It was right across from Sun Sun grocery store, which made shopping convenient. The building was gritty, however. The elevators broke down twice for the handful of years we were there. I had allergic reactions, and learned about dust mites. Once, someone smoked in bed and caused a fire, and we stood in Sun Sun’s parking lot for hours while it was put out and the injured were taken to the hospital.

So we moved, to Tai Tung Village. Tai Tung means “big common,” a shortened phrase for solving problems together. There are four buildings, with a playground and laundromat in the middle. Sky bridges connected the buildings. The elevators went to every three or four floors, and there are fourteen floors. We were on the eighth floor. I could hear Tufts Medical helicopter rescuing people sometimes in the wee hours of the morning. Ma was a daycare teacher. Da was a waiter, small time chef, bartender in various Chinese restaurants. A three bedroom was affordable then at Tai Tung Village. 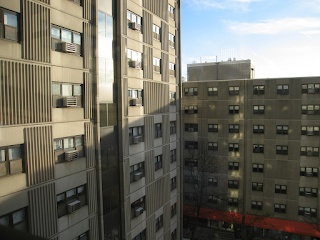 Tai Tung Village was a result of negotiations to build community housing in this neighborhood. It was classified as Section 8 housing, a federal government program for assisting very low-income families. Rent was controlled. There is a very long waiting list, so my family was very lucky. We, a family of four, used to be able to live off of less than $2000 a month; then the environment changed.

Some of the changes were good. The red light district has been reduced to only Centerfolds and Glass Slipper. The buildings behind it have been developed into the Theater District, as well as some campus buildings for Emerson College. The Boston Common movie theater sprang up. The cops on bikes reduced crime. Gang activity largely went away. Trash became regulated. Businesses thrived: bakeries, restaurants, banks and others.

Some of the changes were harder to live with. Rent is rising, for one thing. It is about $1000 per square foot to live near Chinatown and Boylston (realeastate.boston.com). The garden that came with the Big Dig is nice, but it displaced about 300 residents (WBUR). The neighborhood is hemmed in by the highway next to South Station, as well as offices and shops considered part of Downtown Crossing. The Kensington luxury apartments developed at the cross section of Beach Street and Washington Street. Rents are well over $2000.

The land value is going up in general, due to luxury housing and competition in the fashion arena. Primark is directly competing with Forever21, though Macy’s has a firm hold on the 30s urbanites. Chinatown is made of its land and its people. Now the land is being slowly bought out by commercial interests. The younger generation is moving away to seek cheaper rent. I live with two roommates out on the borderline of South Boston and Dorchester. Chinatown is slowly petering out.

Chinatown needs more legislation like the initiatives that built Tai Tung Village for affordable housing. The businesses will stay as long as there are consumers, but then Chinatown may be reduced to Americanized Chinese food, its culture dissipating into wok grease digested by residents of luxurious condominiums.