My take on "Self Perception" by Michael Tow and Teja Arboleda


Another Chinatown Blogger who is also of mixed race, Adriana Li, asked me what I thought of it. I guess superficially I do think that a lot of Asians tend to make assumptions about other people's assumptions, whether they are white or black or whatever. So many times Asian Americans (who are assuming I am fully white) will crack a self deprecating Asian joke and I will find I have no idea what stereotype they are even referring to. And it is true they will also assume a bunch of stuff about white people, seeing them as one conglomerate group instead of many sub groups of different ethnicities.


Should I talk about my PERSONAL experience?

Well since this is my entry... I will.

I mean I can see this type of couple nowadays. In fact this couple is almost a bit of a stereotype now (even though I think most people would assume the Asian Male white female pairing is not as common as the reverse.) You see, when I tell people I am mixed, they will assume the reverse of this pairing. Like, "So your mom was Chinese?" So I guess this video may feel that it was breaking the mold by having the Asian Male instead of the Asian female in a mixed race couple.

I think nowadays, this pairing is quite normal. And not only that, if you were to assume a pairing of these two races, the assumption would be that the male would speak English very well and that he wasn't any of the stereotypes listed in the many categories. 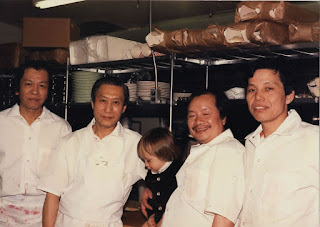 The one holding me.... the one who thinking about it, kind of got a little made fun of in the video above...

and here is an old post showing my Mom and her Aunt (whom I also called aunt) ..

Also...My Uncle Francis really did get part of his ankle blown off in Vietnam (it killed his war buddy next to him) Infact when my mom brought my Dad home.. I was already like 3 and a half, or closer to four, my grandfather cooked him pancakes and cracked a joke about how he's love them or they'd kill him (but my dad didn't speak English so the joke died in translation) and then my dad actually had a stroke later that night.)

I guess here is where the important message of the video comes across. In the end none of those perceptions matter because you are family already, and that is what matters.
I mean the movie is three minutes. It's difficult to talk about all these things so quickly. And Tow and Arboleda did a fantastic job especially for mixed couples of young professionals you see nowadays.

It's not really about stereotypes or perceptions as much as it's about who is there for you.

Going down to my generation, I guess it's the same thing because Grace is Asian and I'm perceived white, and I guess this video may have held some truth to it regarding my wife's first visit to my family.

Me visiting her side of the family is a whole other story. But I guess since I've basically been raised in an awkward situation... well I tend to find this video more true to my experience. Even though we were actually Buddhist and Catholic and there was no conflict whatsoever.

I mean, Michael Tow and Teja Arboleda did a fantastic job with this story and the acting and the editing. You can tell it took a lot of work. And I can see people laughing at that joke where Michael Tow is wearing the cook's outfit with the cigarette, like, "Oh my goodness they must have thought he was a chef working in the back."

I can see how that would be funny to a lot of people. I guess it is funny.


So? So what if he is? So what if that is my dad? Not just a perception but that's him.. That IS him and so what? Shoot I know of a lot of mix raced people  whose father's are from this background.....


I talked to Michael Tow about this and he mentioned that actually his grandfather was also a chef, and that he thought about him when putting on the costume in the video too.

I guess I am a super sensitive Asian American after all! Lol