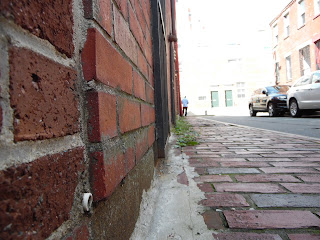 The following story was posted by a friend on Facebook. I think I do have to set the stage though because my friend is very unassuming. An older gentleman that doesn't look threatening.

"Hasn't happened in a long time, but my reaction is still the same: Walking past the Duckboat queue in front of Star Market at the Pru when I hear "ching-chong..." or some such gibberish. Without even thinking, I turn and say in the general direction of the speaker, "What the f@ck did you say?!"
Three late teen, early twenties blonde headed boys with mirrored sunglasses were sitting on the ledge. Obviously tourists. The middle one stutters, "I, uh, buh, didn't, uh..." Louder this time, I say, "The F@CK you say?!" More stuttering. Suddenly I realize there's three of them. I look at the one closest to me; tank-top, tattoos, fairly muscular. I look him straight in his mirrors and he looks away. Nice, I'm in control.
Again to the stutterer, with a finger in his face and a slight whisper, "You better watch your little f'ing mouth next time." I walk away, but make sure to turn around once more with the glare.
Thinking about it later, I probably should have asked where his parents were, because I'm sure they were around. I could've made it a "teachable" moment, but I still think I'm in my twenties and can give (or take) a beating. Oh well, at least I scared the

💩 out of him (them) and I hope they'll think twice before ching-chonging another Chinaman.