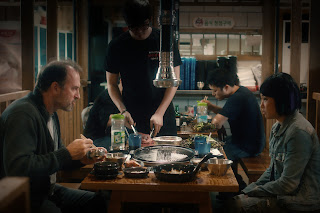 I just watched this movie and I'm actually watching it again. It's one of those movies that I could totally see playing over and over on TV all the time. Like the "Devil Wears Prada." I was trying to think of what kind of movie it is. Is it a social justice movie? A coming of age movie? An "Asian" movie? But it's actually an American Romantic Comedy. I mean, the people that liked "16 Candles" would love this movie....which is the genius of it. It talks about issues of stereotypes (which 16 Candles is famous for) and although it starts off with Asia's monologue that focuses on this. The movie isn't really about that. It's about love, growing up, growing old, mid life crisis and all taking place in just a few days.  There's a lot of food in the movie too and I got pretty hungry watching lol.

I got a chance to talk to director Kat Moon and here is the interview!

BCB: What inspired you to make this movie?

Kat Moon: When we screened in Cali, some people came up to me and congratulated me on my brilliant acting in the film.  They thought I was Jenna!  That's one reason. Yellow Fever is a lot, a bit a comical "edumacation" on all the wrong things people say.  The other being there simply aren't enough stories with a strong female Asian lead that buck the stereotypical Asian female characteristics of being a kungfu master, a submissive sex doll, or the math geek. I wanted to portray my lead as an American, without having to preface it as "Asian American."  But I couldn't, because apparently a film about a Korean American girl adopted by a white family is still categorized as "ethnic." I mean, being American these days should mean a rainbow of colors and mixed families - notice I say should.

(On yellowfevermovie.com under director's statement, there's also a blurb about Korean-American adoption history, which I thought was very interesting and a reason why I set the film in the year 2000).

BCB: What's with the title?

Kat Moon: Yellow Fever.  Catchy isn't it? That's a big reason.  We all know the negative connotations of having "yellow fever" in that creepy fetishized sense.  But I wanted this film to redefine the term - take it back, so to speak.  Why can't someone who's crazy bout kimchi (the food, not the derogatory term) have yellow fever?

BCB: Is this your first movie? What was your experience writing and directing?

Kat Moon: Yes this is the first feature film I've written and directed.  It was certainly taxing at times, but when the adrenaline kicks in and you're in it, you're in it to win it.

BCB: How did you feel when Nahhani Johnstone won for best supporting Actress in London?

Kat Moon: I was thrilled when Nahanni won!  She played her role so brilliantly and I'm so proud to have gotten the chance to meet her and work with her. On that vein, I'm just so pleased with our whole ensemble cast.  Jenna Ushkowitz, as you know, was the lead Korean American on Glee, Scott Patterson was the famous Luke Danes on Gilmore Girls, and Michael Lowry was just nominated for a Daytime Emmy.  So we really did have a high caliber of acting talent.

BCB: What are you looking forward to in the future?

I'm looking forward to telling more stories about under-represented people.  There's a lot more swirling round in this head of mine.