Posted by Kung Fu Dad on August 24, 2017
I was talking to Sensei Dixon 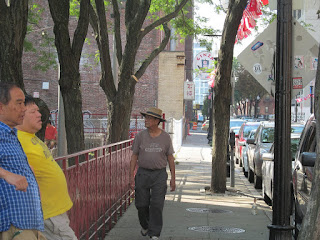 and I asked him about the march.

Now we had talked in the past about some of the racial problems in Boston.

However I liked what he said. That we may have had our problems and we may beat each other up, but ultimately the fight for freedom started in Boston.


Whether it is Nazis or Terrorists with pressure cookers or going back to 9/11  when the planes flew from Logan... ultimately Boston will come together.


Chinatown used to famously be a violent meeting place where all the different groups (that did not really hang out with each other) would go to Chinatown either to eat, or to try to go to a peep show or whatever. Fights along racial lines would break out quite often. It's not that racial fights were uncommon in other neighborhoods. It's that in many ways Chinatown was a place where these groups would bump into each other regularly.

Many older men look back on those times of violence with smiling and laughing eyes.  But also know that that is better left in the past. One man said of old Chinatown, "It was one of the only places where we could kick ass. If we went anywhere else, we would get out ass kicked."

This brawling culture lasted up until the 90's at least. Now? I haven't heard of any fights like that. But the point is, although the fights were along racial lines that doesn't mean that the participants hated each other truly because of their race or had a fundamental belief in the other side being lesser than.

In fact oftentimes the groups that brawled were different ethnicities of Asian. And I'm sure often it was even two groups of the same ethnicity.

But getting back to what Sensei Dixon said of the march.

"We are Bostonians yes we have our race issues but we deal with them among ourselves we don't need any outside influence whatsoever ... 9/11 when the cowards high jack two plans out of Logan we bonded together (forget) TSA we will take care of anyone who tries that ....again ... When those cowards set off two bombs at the Boston Marathon they declared war on our city we bonded together that will never happen again ... We are the Prudential State, fool us once shame on us ... You will never fool us again ... The Nazis rally brought out more White People than Blacks or people of color ... The fight for Liberty started here ... We are Boston we may fight each other ... But we will band together and  beat the $#% out of an outsider ... We are home of the 54th."