Mayweather, McGregor, and a fight from another generation

Posted by Kung Fu Dad on August 26, 2017
I would bet on Mayweather for the fight about to happen in an hour, but one never knows... and honestly I suspect that an old White Crane vs. Boxing story can kind of predict what may happen. 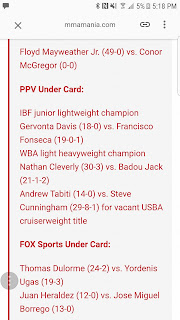 Yai Wau was a Hung Gar Master from Doushan, Taishan, Guangdong, China who ended up studying under Chan Hak Fu after being defeated by him. Chan Hak Fu's Kung Fu style had already mixed with the boxing of the time (different from modern boxing) but still similar to British outside fighting in terms of the body position and straight punches.

That's not the fight I am talking about though.

Yai Wau went on to have an official fight with a Russian Boxer in Hong Kong before Communism shut the doors to everything. The fight, like this one obviously had an appeal of Kung Fu vs. Boxing (now MMA vs. Boxing) and Race was also involved. White vs. Asian (now White vs. Black. Bo matter what you say about the fight not being about that, both fighters know it is this aspect that is going to make them a good deal of the money they will make. Yes there is also just the MMA vs. Boxing aspect... even though the rules will be all Boxing.)

The rules for Yai Way vs. The Russian boxing (see how much about race it was? I don't even know the opponents name) were straight boxing as well. Yai Wau, a 6 county Kung Fu Champion who took all comers (but those who accept this challenge might be masters, that is different than a professional prize fighter) really thought he would be able to defeat the boxer under boxing rules.

He quickly realized that he was mistaken. The boxer was able to slip in and the punches had a lot more pushing power than the Kung Fu punches. Boxers lean on their punches because the legs are not a target and one does not have to worry about sweeps and take downs.

Yai Wau realized that he might not only lose... he might get knocked out, embarrassing himself, his system, his country and his race.

He stepped back and started throwing cup kuens, punches similar to haymakers that are illegal and he damn well knew it. The story goes (but how true is it? I don't know) that he hit the Russian Boxer in the back of the head (also illegal) and fractured his skull almost killing him.

The justification was it was better to be disqualified and lose than to be knocked down and lose face.

Now... another aspect of the legend... not through the Kung Fu story telling but through the village which the Kung Fu lineage says to be false is that the Russian "lo fahn" with his powerful "lo fahness" hit Yai Way so hard that he ruptured his intestines causing him to have a hernia that had to be operated on. The start of this legend was a scar on Yai Wau's stomach.

The Kung Fu legend is that this rupturing was dosed out by Ng Siu Jong, Chan Hak Fu's Sifu and Yai Wau's Grandmaster. When the grandmaster asked Yai Wau to demonstrate a punch for teaching purposes, Yai Wau through the punch right at the grandmaster's face. Ng Siu Jong slipped the attack and did a mein lei jum crane's wing attack which made Yai Wau double over like a shrimp.

Maybe Yai Wau just had his appendix out.

But those are the legends.

How would this compare to Mayweather vs. McGregor?

I'm just saying whether the legend of the fight is true or not, I think that at some point McGregor will start throwing illegal moves. Even in the Olympics and in Professional Boxing matches it happens. Tyson complained that Holyfield was headbutting him.

This is a serious risk that Mayweather had to take of course and he must believe he is ready for anything.

McGregor probably thinks that by throwing unorthodox boxing moves that are legal or semi legal or passing for legal he will be able to compete at least.

Now I had to have a discussion about racism and political correctness, but honestly my son is not being racist by pointing out the obvious. Would this fight get as much attention if Connor McGregor were a black MMA fighter? I mean this is literally the plot of Rocky, which was based on the fight between Chuck Wegman and Muhammad Ali.

It's the same reason that any sort of competition held in China where there is a Japan vs. China aspect will sell out and make money. You could probably have a thumb wrestling contest that will get high turn out and chants of "Jia Yau Jia Yau Jiayau!"

I had to explain that just saying that can be deemed racist but indeed the fight is getting attention because of race. But also, wanting to watch the fight doesn't make you a racist and many whites have their money on Mayweather and some African Americans point out that anything can happen.

Mike Tyson's opinions are most valued because of his boxing background but also because his life experience and  of course I agree with everything he said. Except that, McGregor has a lot to gain by agreeing to fight with boxing rules because ultimately, McGregor is not even the UFC champion and he really owes Mayweather a huge favor for this opportunity.

I do think that even if McGregor does not throw kicks per se... he will throw something that is usually not thrown in a boxing match. And in truth, towards the end of the fight he very well may through kicks to defend his life and hope that the fight is stopped instead of getting knocked out.

Who am I rooting for?

I hope nobody gets seriously hurt and I hope that everything goes as planned. That is to say, we will have a very entertaining fight and both people get paid and a winner and loser will somehow be determined by skill or at least a non threatening type of injury even if it is a knock out. In other words I hope it is a contest and a sports fight and not a tragedy.

I hope it really is less about race and more about fun.

Someone has to lose though, and it will be probably be hard to swallow for either player.