Quincy School on the National register of Historic Places.

Posted by Kung Fu Dad on August 12, 2017
This monumental and historical event will be announced at 10 am also opening the 48th August Moon Festival. 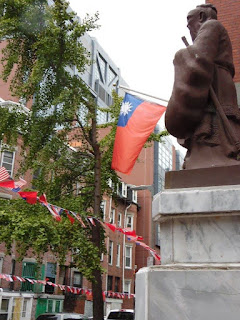 The school, built in 1948, was the first to have classrooms separated by grade. Chinese immigrant families had attended the school for 135 years, along with Syrian, Jewish and other immigrants in the neighborhood. At one point it served as a Lebanese club. Later it fell into such disrepair that children would run past it with their eyes closed. In 1983 the building was handed over to the CCBA by the City and served as a community center. Kwong Kow Chinese School was housed there as well as CACA (later AACA), which are now across the street.

Under the CCBA's leadership it is now a beacon of Chinese Culture and social interaction.

(Information from a public e-mail by Nancy Lo and also former Chinatown Blog interviews and my personal experience.)