Posted by Kung Fu Dad on August 24, 2017
After some of my posts about Irony Fist and also some discussions about Donnie Yen in Star Wars, some friends have commented to me that Danny Rand was originally a blond haired Caucasian in the comics and that maybe he SHOULD be represented as such in the Netflix series and the Defenders. 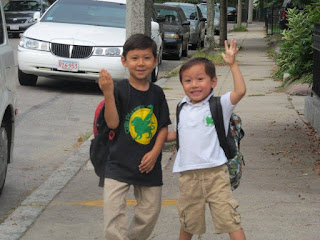 (Could these brothers be cast as brothers?)


"They should represent them how they are in the comics...let them create new characters for the PC crowd"

I pointed out that Superman is now Asian, thanks to Gene Luen Yang, and that actually even in the hit show "Lois and Clark" Dean Cain was half or at least part Japanese.

The funny thing is back then... I don't recall it being a big deal that Dean was cast. Maybe it's because he still looks like Superman. And the jump from Clark Kent's looks to half or even fully Asian is not a big one. I have heard that the Jewish creator of Superman really envisioned him as a Jewish American and this can be seen in the origin story of Superman as well as the time period when the comics were first written.

So Danny Rand does not look Asian in the original comics, but given the fact that the character is doing all these Chinese Martial Arts... the point is that he should have been Asian in the first place.

For Star Wars... even some of Donnie Yen's Chinatown friends thought that mostly his casting was to break into the Mainland Chinese Market. But the lamenting of "Just let Star Wars be Star Wars" was thrown in there.


On the one hand... I don't always think the White Washing thing is a big deal in one instance. It is more so when it is seen over and over and over again that it becomes a problem. And then if an Asian Character can be cast as white, then the reverse should be true... open casting.

Especially in Science Fiction where race shouldn't matter given that some characters are aliens.

Maybe that's another reason why the jump for Superman being Asian is not a big deal to audiences. He's not even human technically.


Now, with the recent Marches for equality and the other crazy stuff that ended up being 12 dudes who nobody could here, this type of opinion coming from someone who at least looks white might look like some sort of apologist Nazi sympathizer. I guess I will have to share my personal opinion here.

No I do not think Danny Rand should have been cast as a white guy if he is going to be the hero of Chinatown (unless it was me. I would take that money so fast...) But if he does have to be a white guy, then it could still work. The problem with Iron Fist goes way beyond who they cast. Every single Asian character was a villain or someone who was cheap and un-heroic. And yet at the same time... I watched the whole series to the end.

I also watch some of the whitest shows on TV though. Reign. Vikings. The Last Kingdom.

But I also enjoy watching Roots and Shaka Zulu.

Of course both of those series are still written with white audiences in mind.

I guess I will watch anything that is good, and I really don't care much. So I am surprised when people do care. When an Asian cares and does something about it... I will support it because this is the Chinatown Blog. I can't see myself actively fighting to keep things as they are though.

But because the sentiment was shared with me by Asian friends, I figured I would throw it out there as part of the opinion that makes up Boston's Chinatown.
opinions