Posted by Kung Fu Dad on November 20, 2017
Hailing from Szechuan, Chengdu, Tina Liu is joining the Chinatown Blog team as a major contributor Having completed her PhD in China she is working on her post doc at Boston University, where she is researching Boston's Chinatown and the North End (Boston's Little Italy, for those readers outside of Bean Town.)

We will all be excited to view the fruits of her research as well as to read the perspectives of someone from China, who is studying, but not necessarily a part of Boston's Chinatown. 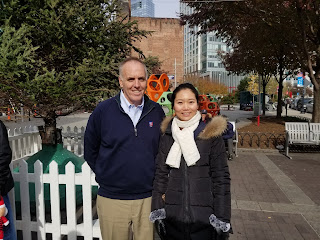 Instead of interviewing her, for a change, I was interviewed, and so were many more of Chinatown's extended community as well as its residents.

We are looking forward to the scholarly attention and research that this new leader will bring.