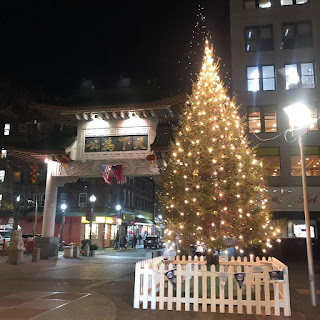 Ahh Christmas in Chinatown. Believe it or not, when I went to Kwong Kow Chinese School, Christmas was the biggest holiday we celebrated, not Chinese New Year, or any of the other Chinese Holidays which I know almost nothing about because of that. You see, we read about them, and the teacher would talk about what "we all do at home." But I was just sitting there clueless barely understanding what was being said.

But For Christmas, we learned carols, we sang songs, about little baby Jesus, "Siu siu dic yeh so...."
And I have to tell you, as someone who took off every year to visit Philadelphia and celebrate a Euro-American Christmas in its natural setting, the Chinatown version threw me off.

We learned all the songs because we would walk down to see the Mayor (at my time it was Mayor Flynn) and there would be much ceremony and pomp and circumstance. I remember a Chinese Santa Claus (I think one year it was a friend of mine who was a few years older)  that handed candy out to us. It was like we were being converted by missionaries, because at that point NONE of my Chinese friends celebrated Christmas at home. I think it was that the teachers had grown up being converted by missionaries and somehow felt that this strange practice of conversion was a MUST for children to be happy in the winter.

None of the Christmas songs that I like now were part of the repertoire.

Now what do they do nowadays? I have no idea. The tree lighting ceremony is for every neighborhood. Does Kwong Kow still have kids walk out to be the audience for it? As someone who no longer lives in town I will depend on comments!

Oh yes... one more thing of note. As all children learn the dirty version of Jingle Bells a la Bart Simpson "Jingle Bells, Batman Smells" so too is there a dirty Chinese version. But I confess I learned this from a group of older people who sang the song, but I was not in their group while they did so. Though I may have heard mumblings about "that crowd" from the teachers and that I should not learn such things. Though I would argue ANY Chinese I managed to pick up should be seen as a plus.

I will keep it in my version of Canto Pinyin so only those that are able to read that will get offended. This is starting with the Dashing through the snow part...

Sometimes children would get in trouble for the emphasis on the "iueu!" as in eww ke ma... you see?

And then it repeats.

Anyway, It's Christmas time in Chinatown. Thank you to A.Li for the photo. Never have i seen a more picturesque shot with the tree right in front of the gate.