A Look Back: Boston Vietnamese Immigrants Band Together

This was taken from a recent Facebook post of my friend, Tung Mai, who discovered just how important of a role his dad had played in the Boston Vietnamese community. It's a truly inspirational story about how immigrants can make an impact even in our own backyard!

Today I discovered something absolutely amazing: a video of my father on the news.
I’ve told a lot of people about what he did in the past. I’ve told people the story of me in 5th grade, walking into the house after school, and seeing him watch an old VHS of himself meeting the governor. He was going down memory lane to visit footage of a ship he always had a picture of in the house. What I thought was just a boat was actually a full-blown ship. The footage was so old it even had my mom’s real teeth. I never saw those until then!
That day and in that moment, I discovered how much larger than life my dad really was. I found out that an old man who can’t say 15 or 50 without you having to ask him to just say it in Vietnamese, an old man whose food was as good as a public-school lunch, an old man who thought my shoes could be cleaned by our washing machine, an old man could possibly have been a leader.
Anyone can be a leader. Anyone can have a purpose. Anyone can make real and positive change. All it takes is when you hear a calling, you find out where it came from.
To all the people who work hard for access, for opportunity, and for your families - the fight is always worth it and I thank you. My dad was lucky enough to speak English as well as he did, but it was those he cared for who made him feel like he needed to use it. It was not hate, bitterness, or resentment for racism that made him speak up. It was the thought of not being able to feed the ones we love, the distant voice of hungry children, that made his outrage not selfish but necessary.
We should all be so lucky to be the leaders. The limelight is nice, but my friends and family who saw their parents in the footage were just as excited to see it as I was. This means that just being there when small-town history is made is enough to make our children proud of us. So maybe being a leader isn't hard or even all that necessary. Maybe we can just start by not putting shoes in washing machines.
Here's the footage, a little late for MLK Day, and somehow still so right. My dad followed Dr. King’s example, he can follow MLK Day too.
http://bostonlocaltv.org/catalog/V_TCDNRXPCK83YMGE

Caption for the news release from June 1990 linked above:
"Vietnamese fishermen inaugurate their refurbished boat "Miss Liberty," which was banned two years ago for not having the proper equipment. Interview with one of the Vietnamese refugee fishermen,who formed a cooperative and bought a fully equipped boat that would not be in conflict with the lobster industry in the Boston Harbor. Michael and Kitty Dukakis congratulate them and their families on the Fish Pier. Michael Dukakis addresses the audience. Edited story is followed by b-roll of the fishermen and their families on the pier. Michael and Kitty Dukakis arriving at the event and talking with the fishermen. Vietnamese American woman welcomes audience to ceremony and thanks government officials who helped the cooperative. More of Dukakis's address." 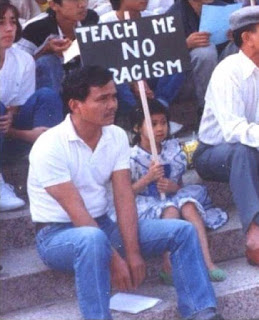