Book review: Step on the Mat by Ninja Nguyen 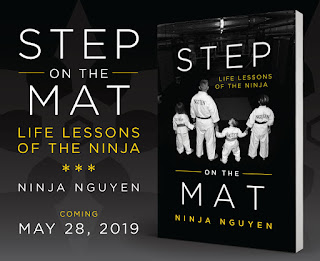 The “Martial Way” has become part of the mainstream culture internationally. But particularly dominant is the American perspective of Japanese Martial Arts that morphed into something that encompasses many of the arts that take place on a mat or in a Dojo. Ninja Nguyen brings a very unique perspective to what it means to be a Modern Martial Artist because he starts of learning Karate, a Japanese Martial Art, as a child growing up in Vietnam, during the Vietnam War.
Nguyen touches on how Karate saved and shaped his life in several environments from a country at war, a refugee camp, life as an immigrant in a new country where he did not speak the language,  as an adult surrounded by the club scene, drugs and gangsters, and finally as an instructor and father trying to create a better environment for his students, children and his family.
As a teacher of Chinese Martial Arts, I plan on making this book required reading for my students and the parents of my students, because it offers life lessons that are more based in the modern experience and relevant to people alive now. Everyone should read this inspiring book.